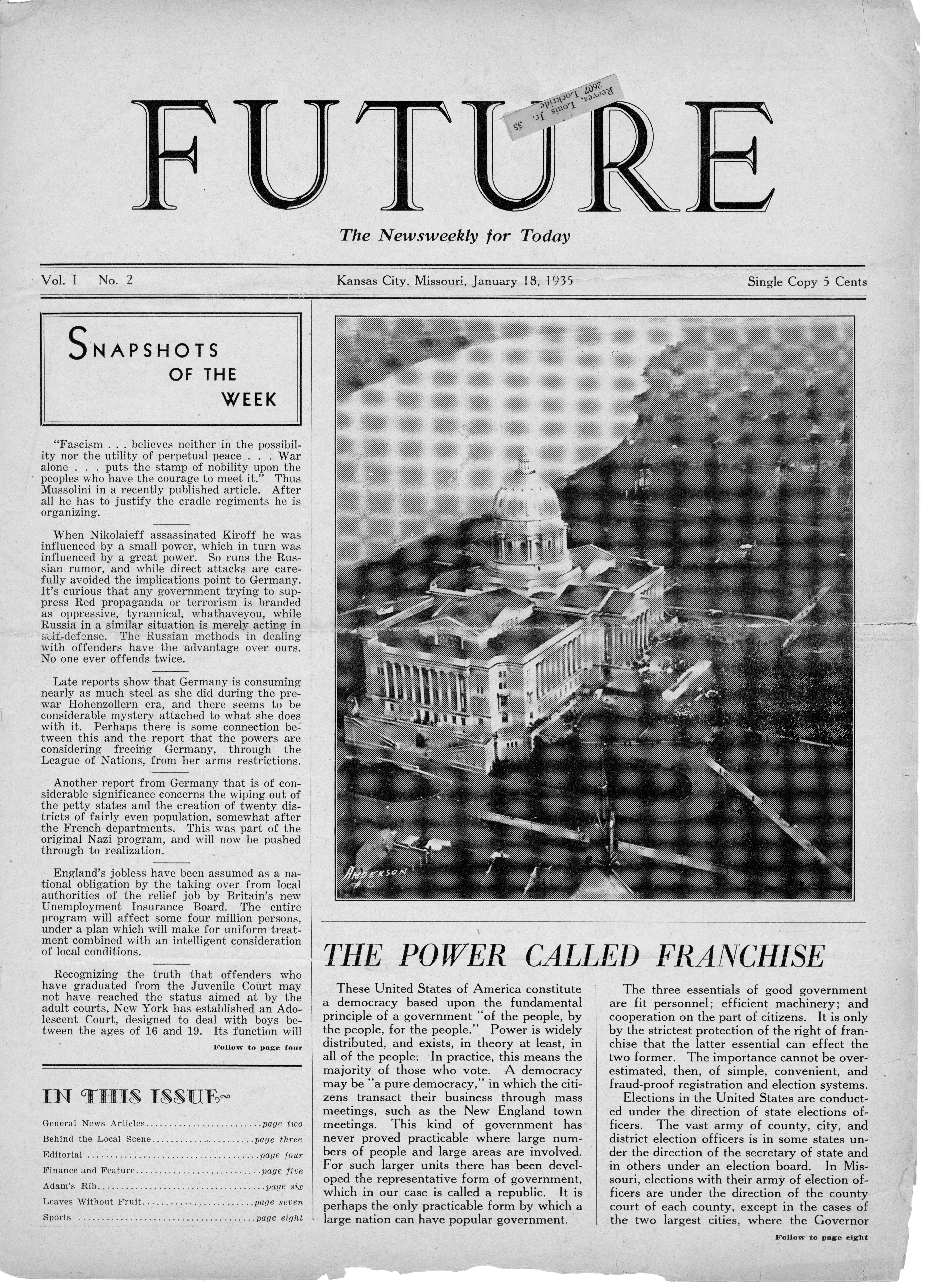 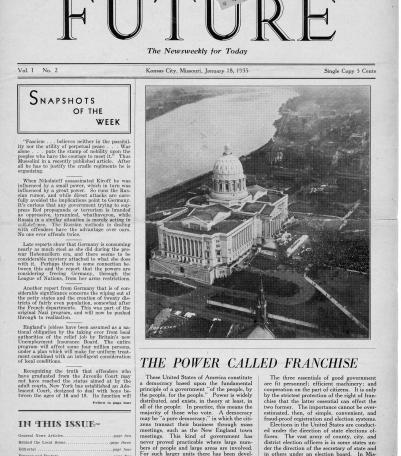 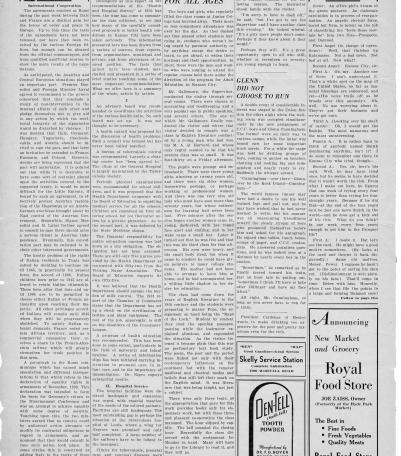 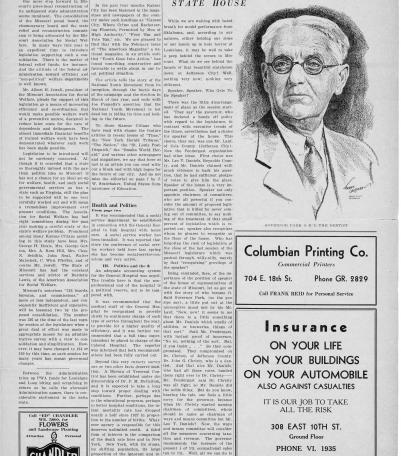 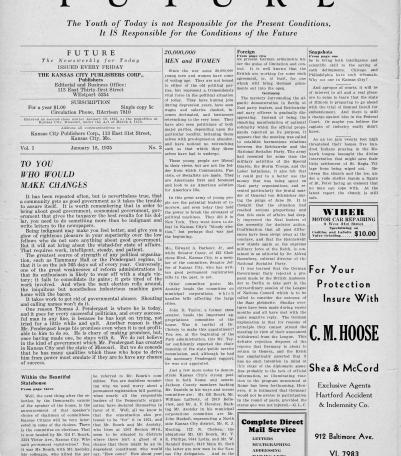 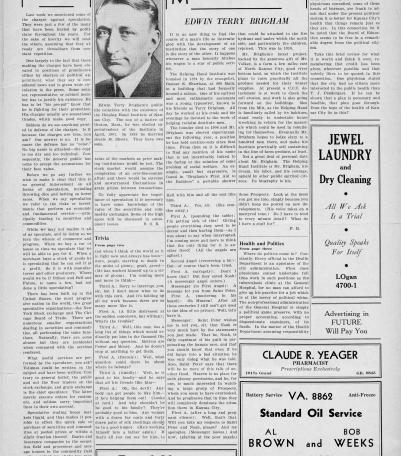 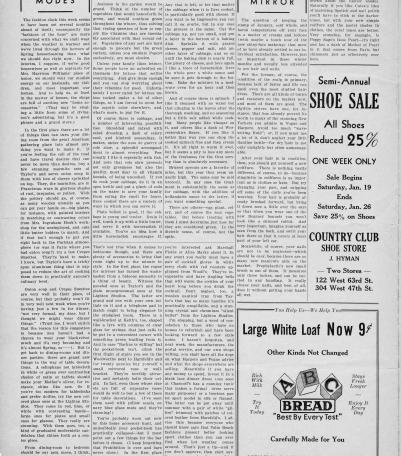 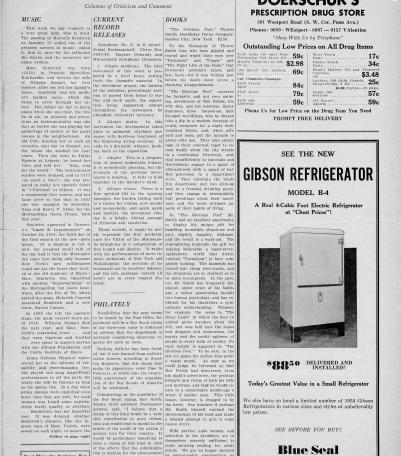 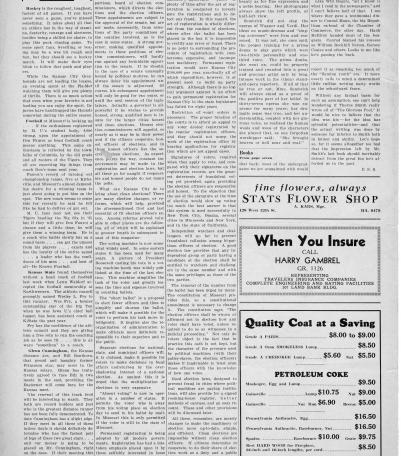 Issue of the anti-corruption, Kansas City-based newspaper, Future: The Newsweekly for Today. The front page includes an article, continued on page 8, discussing aspects of democracy and good government, and suggesting problems and solutions for clean elections. Other featured articles include: "Health and Politics" (pp. 2 & 3), a report on the recommendations of the 'Health and Hospital Survey' of 1930 for Kansas City, with various information about health care deficiencies and statistics, including "a wing for Negroes" left uncompleted "at the tuberculosis hospital at Leeds" and a death rate of Kansas City being higher (12.25) than New York City (10.23); "FERA's Education for All Ages"(p. 2) about an adult education program with subjects including bookkeeping and public speaking, and with young mothers and students still learning English among its students; "Glenn Did Not Choose to Run" (p. 2), about Glenn Cunningham, a University of Kansas track star and Olympic athlete, meeting a group of men leaving Union Station for Civilian Conservation Corps jobs; "Piecemeal Changes" (p. 3), about state management of federal relief funds and a potential consolidation of social welfare and penal boards; "Within the Beautiful State House" (pp. 3 & 4), about the new speaker of the state house and committee nominations and Governor Guy Park’s and Pendergast’s influence in the decision, including a portrait sketch of Governor Parks; "To You Who Would Make Changes" (p. 4), encouraging readers to work against the Pendergast machine rather than just complain about it; “20,000 Men and Women” (p. 4), discussing the large youth vote “not bound to either of the old political parties”; and "May We Present Edwin Terry Brigham" (p. 5), a photograph and biographical article about the superintendent of the Helping Hand Institute; also included in the newspaper are advertisements for local businesses and articles on sports, fashion, finance, cooking, music, and national and international news.