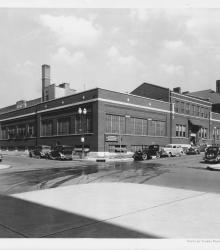 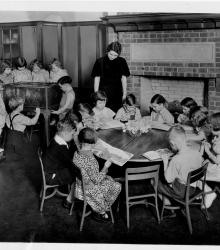 Photograph with an interior view of children seated around the library table and viewing an aquarium with their teacher at the Greenwood School kindergarten. The students are all identified on a separate sheet accompanying the photograph. The teacher is identified as Miss Dorothy Tustin. 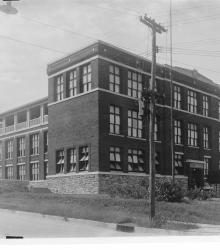 Photograph of the E. F. Swinney School, located on the north side of 47th Street between Holly Street and Jarboe Street. The school was named for Edward F. Swinney, treasurer of the Board of Education, 1894 to 1904. This vantage point faces northwest from the intersection of 47th and Jarboe. 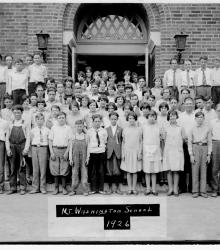 Photograph with an exterior view of an unidentified group of students standing by the east door at Mount Washington School. 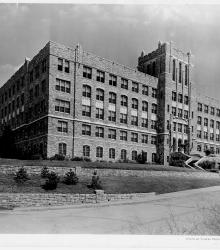 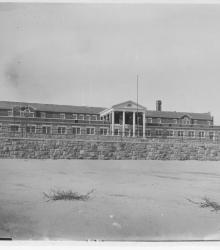 Photograph of with an exterior view of Henry C. Kumpf Public School, built in 1920 on the north side 45th Street between Olive Street and Wabash Avenue. Named after former member and officer of the Board of Education, August 1867 - November 1890. This vantage point faces north near the northeast corner of 45th and Olive. 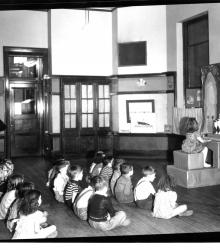 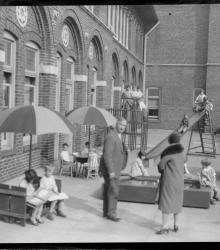 Photograph of children and two adults in a playground on the balcony of the Woodland Public School, located on the north side of 8th Street between Woodland Avenue and Euclid Avenue. This vantage point faces east and shows the south frontage of the building to the left. 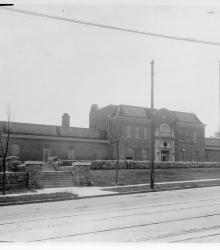 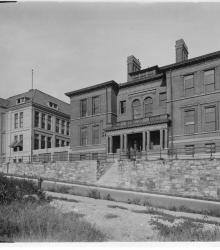 Photograph with full, street level view of Switzer School, located at 1829 Madison Avenue. It was named for Henry Switzer, Secretary of the Board of Education from 1875 to 1880. This vantage point faces east-northeast from just west of Madison Avenue between 18th Street and 20th Streeet. 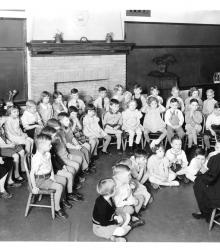 Photograph with an interior view of Seven Oaks School kindergarten with children seated in chairs listenting to a story read by their teacher, Miss Gladys Wilson. The children's names and addresses are included on a separate sheet that accompanies the photograph. Construction of the Seven Oaks School was completed in 1927. 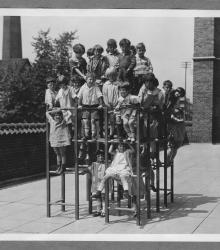 Photograph of children on a jungle gym on the balcony of the Woodland Public School, located on the north side of 8th Street between Woodland Avenue and Euclid Avenue. This vantage point faces west from near the center of the balcony.