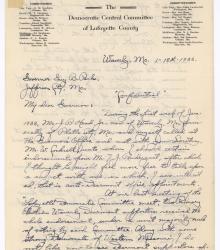 Letter from Edward S. Saughman to Guy B. Park regarding anti-Dearmont appointments with the state highway patrol and penitentiary. 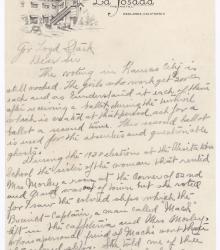 Anonymous letter to Governor Lloyd C. Stark, describing ongoing corruption during elections, and making other accusations of misdeeds in Kansas City. The writer signs off anonymously, saying "am not signing my name for I rather live a while longer and you could have a leak in your office."

From Anonymous to Governor Stark 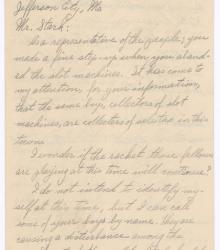 Anonymous letter for Gov. Stark alerting him to the corruption of sales tax collectors in Kansas City, drunk driving by highway patrol officers, and other issues.