From Joseph B. Shannon to the People of Kansas City 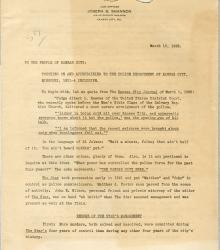 Form letter from Joseph B. Shannon to the people of Kansas City in which Shannon provides a list and figures documenting the rise of crime and police brutality in Kansas City from 1921-24 with the police department controlled by Matthew Foster and The Kansas City Star. 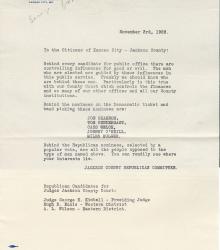 Form letter from the Jackson County Republican Committee to the citizens of Kansas City in advance of the 1922 Election. The letter asserts that the nominees on the Democratic ticket were selected by Joseph Shannon, Tom Pendergast, Cas Welch, Johnny O'Neill, and Miles Bulger. 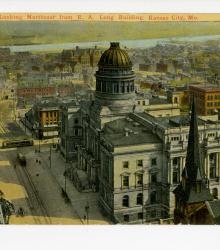 Postcard showing Kansas City, Missouri from atop the R. A. Long Building at the northwest corner of 10th Street and Grand Avenue (now Grand Boulevard). This elevated vantage point faces north-northeast and shows the Scarritt Building (pictured left) and the Federal Building (center). 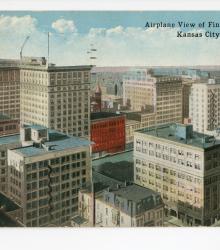 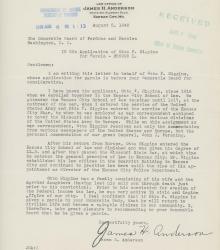 Letter from James H. Anderson regarding the parole of Otto P. Higgins, Inmate #55996-L. Anderson writes of Higgins' commendations as a war correspondent, including "the personal commendation of our great General, John J. 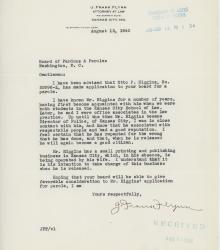 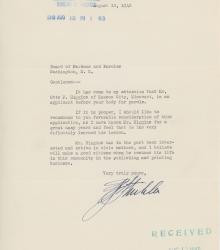 Letter from Thomas J. Strickler regarding the parole of Otto P. Higgins, Inmate #55996-L. Strickler writes that, in his view, Higgins "has very definitely learned his lesson" and will make a "good citizen" upon his release. 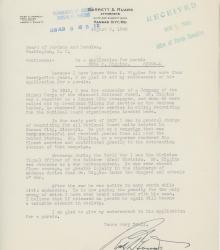 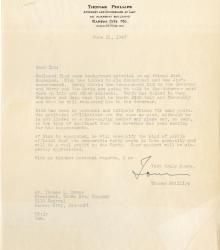 Letter from Kansas City attorney Thomas Phillips to Thomas L. Evans, President of Crown Drug Company. Phillips writes in support of Dick Shanahan for a political appointment. He begins his recommendation mentioning that Shanahan has received an endorsement from James M. Pendergast.

From Granville A. Richart to Sam M. Wear 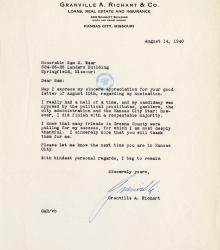 Letter from Granville A. Richart to Sam M. Wear in which Richart thanks Wear for Wear's letter of congratulations regarding Richart's nomination. He comments that, "my candidacy was opposed by the political prostitutes, gamblers, the city administration and the Kansas City Star." 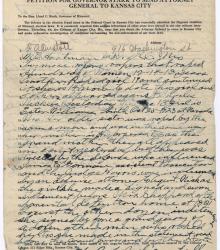 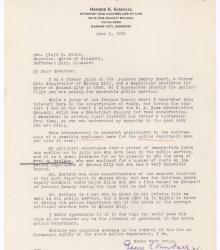 Letter from George E. Kimball to Governor Lloyd C. Stark, discussing corruption in public service. Kimball identifies himself as "a former judge of the Jackson County Court, a former City Comtroller of Kansas City, and a Republican candidate for Mayor of Kansas in 1930." He writes to recommend Fred H.