When You Buy A Home Site: You Make An Investment; Try to Make It A Safe One 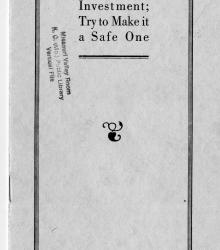 Reprint of a J.C. Nichols article regarding a new subdivision opening in Kansas City. He gives an account of the struggles and successes of the development of this new subdivision and as a real-estate agent.

Liberty Memorial Association Board of Governors 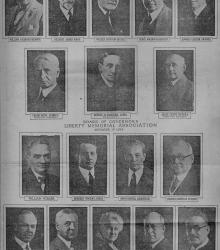 Clipping from the Kansas City Journal on November 8, 1924 showing the Board of Governors for the Liberty Memorial Association. 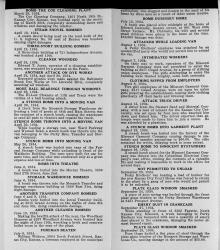 Pamphlet for the anti-union, anti-Communist organization Kansas City Citizens Protective Council, Inc. The document states the necessity for the organization in Kansas City, the goals and methods of the council, and some of the violent acts allegedly committed by local labor unions within the past two years. 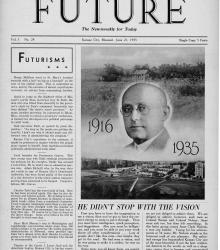 Issue of the anti-corruption, Kansas City-based newspaper, Future: The Newsweekly for Today. The front page includes an article, continued on page 8, about J. C. Nichols and his city planning projects in Kansas City with the Country Club residential district and Country Club Plaza shopping center, etc., including a photo of Nichols. 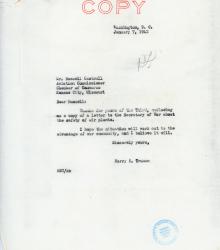 Letter from Senator Harry S. Truman to Aviation Commissioner of the Kansas City Chamber of Commerce Russell Cantwell. Truman thanks Cantwell for sending him "a copy of a letter to the Secretary of War about the safety of air plants." 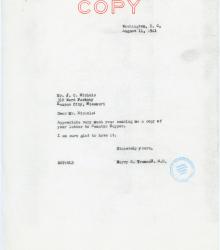 A letter from Senator Harry S. Truman to J. C. Nichols. Truman thanks Nichols for attaching the letter Nichols wrote to Senator Arthur Capper concerning the dispersement of federal jobs throughout the United States. 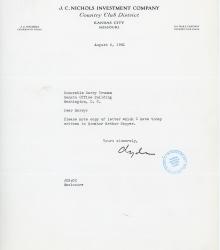 A letter from J. C. Nichols to Senator Harry S. Truman in which Nichols attaches a letter he wrote the same day to Senator Arthur Capper. In Nichols's letter to Capper, Nichols asserts that the federal government should not be wasting building materials on the construction of new federal offices in Washington D.C. 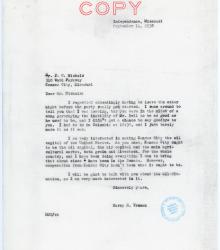 A letter from Harry S. Truman to J. C. Nichols in which Truman regrets having to leave Nichols's party early. Truman agrees with Nichols in his desire to attract oil industry businessmen to Kansas City. Truman goes further in exclaiming, "Kansas City ought to be the oil capital, the air capital and the main agricultural market... 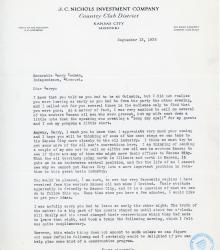 A letter from J. C. Nichols to Harry S. Truman in which Nichols thanks Truman for his attendance at Nichols's party. He also states his intention to follow up with the guests of the party in an attempt to attract more businessmen of the oil industry to Kansas City. 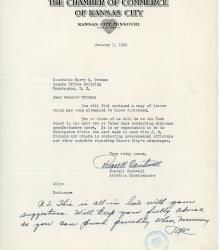 Letter from Aviation Commissioner of the Kansas City Chamber of Commerce Russell Cantwell to Senator Harry S. Truman. Cantwell encloses a copy of a letter from William T. Grant to the U.S. Secretary of War Henry L. Stimson. Cantwell then informs Truman that he will be in Washington D.C. the following week to meet with J. C. Nichols. 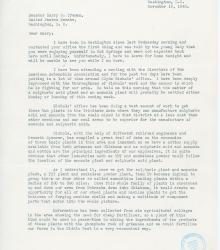 Letter from Lou Holland to Senator Harry S. Truman in which Holland informs Truman that he will not be able to meet with him while in Washington, D.C.. Holland then updates Truman on his meetings with J. C. Nichols concerning the construction of sulphuric, ammonia, TNT, and smokeless powder plants in the Greater Kansas City area.

Declarations of Restrictions Affecting Part of Blocks 27, 28, 29, & 30 of Mission Hills 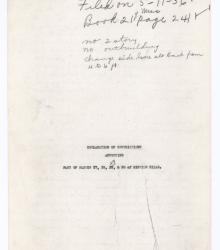 Legal document that details the housing and property restrictions imposed upon sections of Blocks 27 through 30 in Mission Hills, Kansas. Some benign restrictions stipulate acceptable architectural features and minimum residence cost and ground frontage.