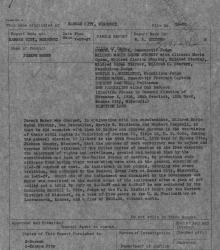 Parole report for Joseph Maher, Inmate #53422, which includes details of the case against him, including his codefendants and date of the crime. Maher was sentenced to two years in the U.S. Penitentiary at Leavenworth after being convicted of conspiracy to deprive voters of their rights in Kansas City, Missouri. 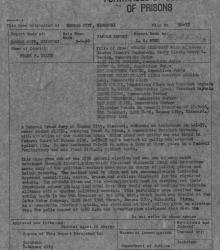 Bureau of Investigation parole report for Frank P. Dixon, Inmate #53423, which includes a description of the charges and evidence against him, as well as listing his codefendants. Dixon was sentenced to two years in the U.S.