No. 30129 - Missouri vs. Oscar Rowe
Rowe is found guilty of giving corn whiskey to Arch Duncan as part of a larger scheme to deprive Democratic voters from voting in the 1928 presidential election.

No. 34750 - Missouri vs. John Gadwood
Gadwood is found guilty of murdering Lee Flacy on March 27, 1934 "during a city election in Kansas City at a restaurant located at 5824 Swope Parkway".

No. 36717 - Missouri vs. Waller W. Graves
Graves is found guilty of purposefully neglecting his duties in prosecuting individuals in Jackson County openly engaging in corruption and vice.

No. 8420 - U.S. vs. Manny Akers, A. W. Jarman, and Jewell Hartman
The defendants are charged with attempting to influence the selection of a jury for the case of United States vs. Frank DeMayo, alias "Chee Chee" DeMayo and Robert Carnahan.

No. 8460 - U.S. vs. Frank "Chee Chee" DeMayo
DeMayo is charged with possession of a Liberty Bond worth $5000 that had been stolen from the mail, "with intent to convert the same to his own use."

No. 10839 - U.S. vs. Joe Pasano, Frank Mulloy, Ralph Rosenberg, William A. Cacy, John Lazia, et al.
The defendants, all suspected of being affiliated with the Kansas City Mafia, are charged with the manufacture, transportation, and sale of alcohol in violation of the National Prohibition Act.

No. 12028 - U.S. vs. John Lazia & No. 12287 - U.S. vs. John Lazia
Lazia is charged with tax evasion for the year 1929. He was suspected to be affiliated with the Kansas City Mafia and the Pendergast Machine. Case no. 12287: Lazia is charged with bootlegging, illegal gambling and tax evasion after losing political protection from the Pendergast machine.

No. 12584 - U.S. vs. Charles Gargotta
Gargotta is charged in three counts related to the possession and concealment of two .45 caliber pistols that had been stolen from the National Guard Armory in Kansas City, Kansas.

No. 14459 - U.S. vs. Robert Emmet O'Malley
O'Malley is charged with income tax fraud for the calendar years 1935 and 1936 by failing to report $22,500.00 in income "received in connection with the compromise and settlement of the Missouri Fire Insurance Rate litigation."

No. 14573 - U.S. vs. Charles Carollo
Carollo, aka "Charlie the Wop," is charged with perjury in connection with his application for naturalization as a United States citizen.

No. 14639 - U.S. vs. Charles Carollo
Carollo, aka "Charlie the Wop," is charged with income tax evasion in the years 1935-1939 with income from smoke and cigar shops, gaming and gambling operations, casinos, liquor distributors, and nightclubs and bars.

No. 14652 - U.S. vs. Matthew S. Murray
Murray, Director of Public Works for Kansas City, Missouri and Missouri Administrator of the WPA, and was charged in five counts with income tax evasion for the years 1934-1938.

Election fraud in Kansas City reached its peak in the Presidential Election of 1936. The following court cases reflect the first effective legal counter to Pendergast politics and signal the beginning of the end of the machine. Each court case is separated by voting precinct where evidence of voter fraud was found. View the location of these precincts on the 1936 Election Fraud Map. 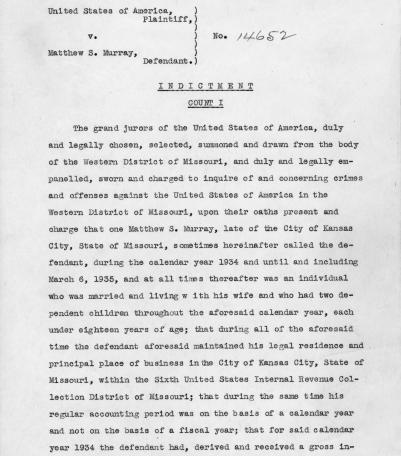 Indictment in Criminal Case No. 14652: United States vs. Matthew S. Murray, defendant. Murray was the Director of Public Works for Kansas City, Missouri, and Missouri Administrator of the Works Progress Administration, and was charged in five counts with income tax evasion for the years 1934-1938. The indictment catalogs his sources of income and taxes paid for those years, as well as the outstanding tax amounts. Income sources include John J. Pryor, a Pendergast-affiliated contractor.