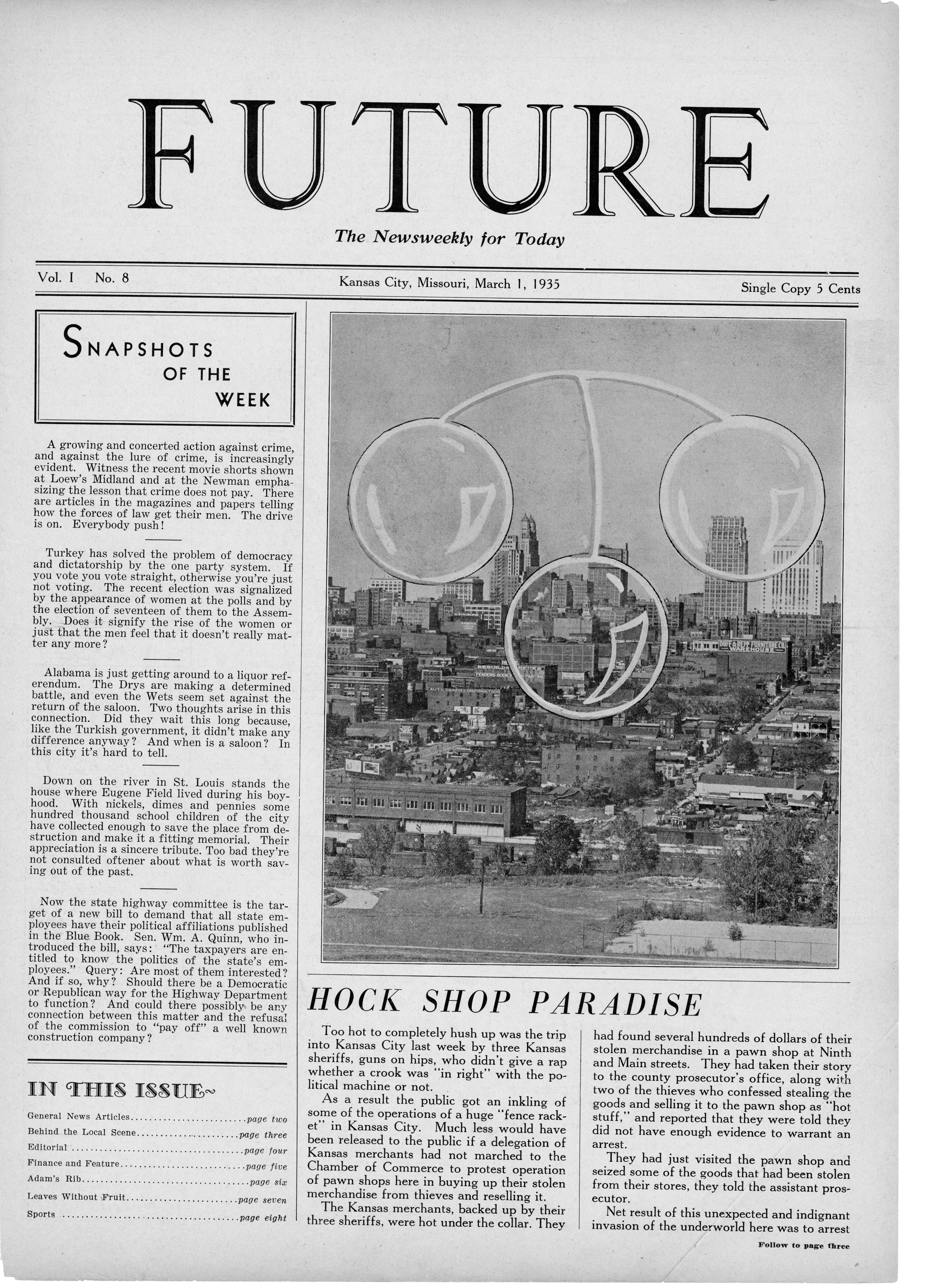 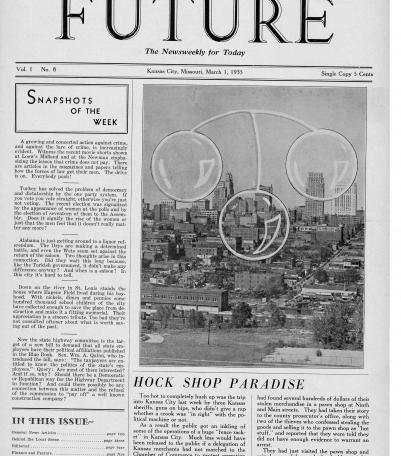 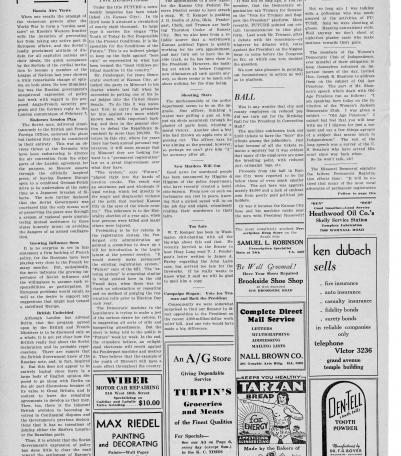 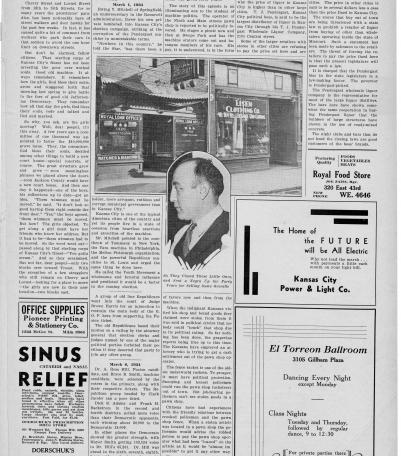 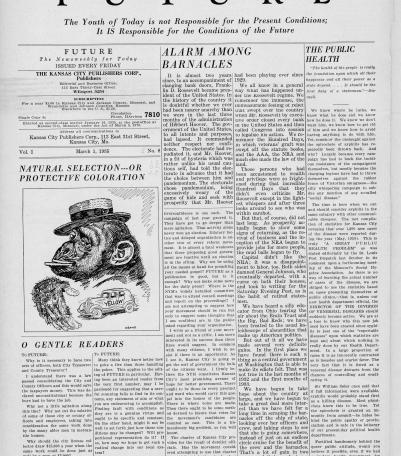 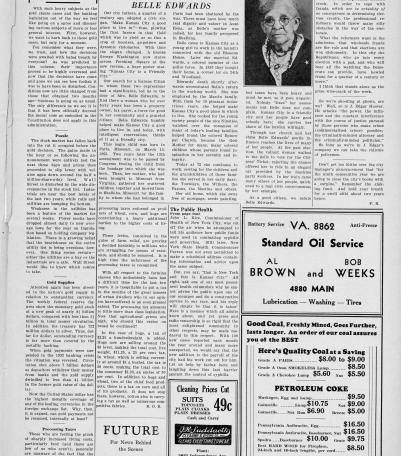 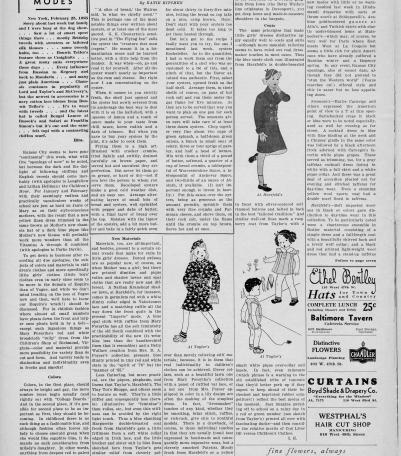 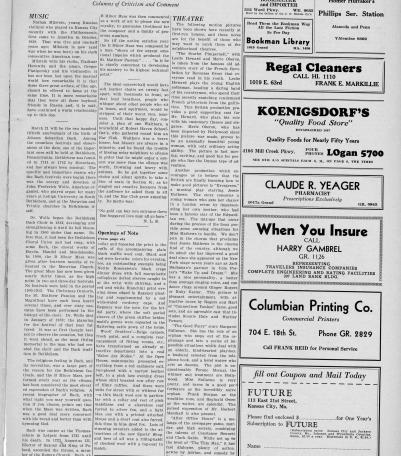 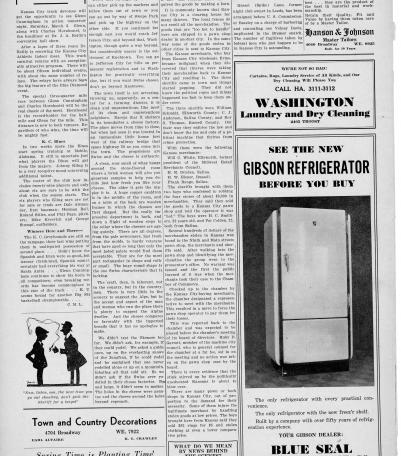 Issue of the anti-corruption, Kansas City-based newspaper, Future: The Newsweekly for Today. The front page includes an article, continued on pages 3 and 8, about the selling of merchandise stolen from Kansas merchants in Kansas City pawn shops, and description of the subsequent closing of small shops not tied to the Pendergast machine and sentencing of a black man to 40 years in jail in lieu of convicting the proprietor of a guilty shop at 9th and Main Streets, and other issues. Other featured articles include: “Fame!” (p. 2) is a reprint of a New York Herald-Tribune article about Future and its anti-machine stance; “Move Over, Girls, the Machine’s Moving In” (p. 3), a column about the forced relocation of prostitutes from their usual place between 12th, Cherry, Locust, and 13th Streets to "only two blocks over toward Troost" by the Pendergast machine, mainly due to their poor image presented in front of the new Jackson County Courthouse; “Ready-Mixed Whiskey” (p. 3), a discussion on the supposed price-fixing of alcohol in Kansas City and its relation to the ownership of T. J. Pendergast Wholesale Liquor Company at 2101 Central Street, "the largest distributor of liquor in Kansas City," by Tom Pendergast, "Kansas City political boss." Pendergast also the owner of the Ready Mixed Concrete company; and “May We Present Belle Edwards” (p. 5), photo and biographical article about Belle Edwards, a 72-year-old black woman, "good citizen," and widow of "Edwards, a colored member of the police force" of Kansas City, and who was born in Paris, Missouri, in 1863 into slavery and coming to Kansas City "to work in the laundry connected with the old Blossom House," with residence at 24th and Woodland Avenues; also included in the newspaper are advertisements for local businesses and articles on fashion, finance, cooking, music, art, letters to the editor, and national and international news.