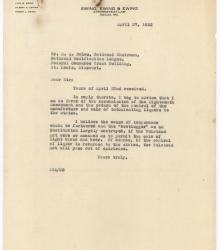 Letter from Lee B. Ewing to E. A. Boles advocating for overturning the Eighteenth Amendment and the Volstead act. 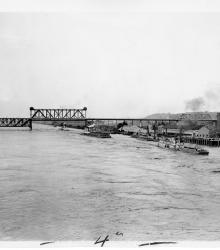 Armour-Swift-Burlington Bridge, with the Mark Twain and the General Ashburn, stern wheelers, carrying Patrick J. Hurley, Secretary of War, and his party on a trip to demonstrate the navigability of the Missouri River. This vantage point faces east towards the bridge and the south bank of the Missouri River. 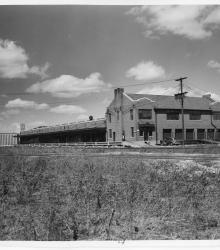 The new municipal wharf on the east side of state line in Missouri, opposite the airport. This vantage point faces northwest with a newly constructed river-rail grain terminal (Kansas City, Kansas) in the far background.

From Bennett C. Clark to James A. Reed 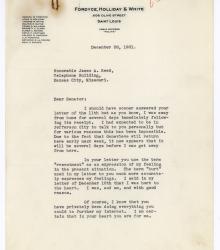 Letter from Bennett C. Clark to James A. Reed in which he expresses his dismay of Reed's neutrality between Charles M. Howell and Clark's U.S. Senate campaign.

From James A. Reed to Bennett C. Clark 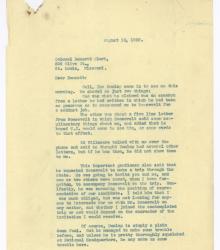 Letter from James A. Reed to Bennett C. Clark in which Reed discusses his meetings with Ike Dunlap and Ed Villmoare. Reed mentions that Dunlap showed him a letter from President Roosevelt. In it, Roosevelt expresses his hope to meet with Thomas J. Pendergast soon.

From James A. Reed to Tom Pendergast 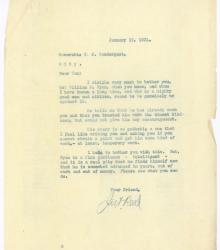 Letter from Senator James A. Reed to Tom Pendergast asking for his assistance in getting William P. Ryan work. 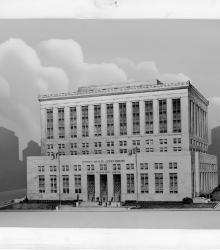 Architectural rendering of a planned United States Courthouse on Grand Avenue (now Grand Boulevard) between 8th and 9th Street, to be completed by 1939 in Kansas City, Missouri. This vantage point faces east-northeast on 9th Street between Grand Avenue and Walnut Street.

From August A. Busch to James A. Reed 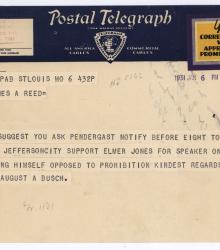 Telegram from August A. Busch of Anheuser-Busch to James A. Reed. Busch suggests that Reed contact Thomas J. Pendergast concerning "his men at Jefferson City". Busch says that "only one" is openly opposing prohibition. 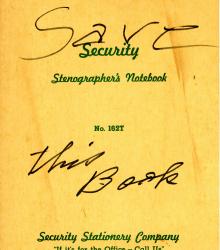 Correspondence from Thomas Pendergast Jr. to Margaret Truman Daniel, likely dated after the 1973 publication of her biography about her father, Harry S. Truman. It is unclear if the note was ever delivered or if it remained in Pendergast Jr.'s possession. In it, Pendergast Jr. accuses Harry Truman and James M.

From James A. Reed to August A. Busch 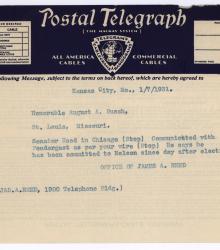 Telegram to August A. Busch of Anheuser-Busch on behalf of James A. Reed. In his absence, the office of James A. Reed contacted Thomas J. Pendergast as requested by Busch and communicates that "he has been committed to Nelson since day after election." 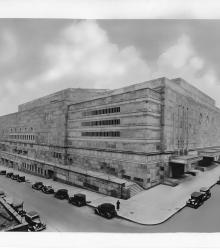 Photograph of the exterior of Kansas City's Municipal Auditorium, ca. 1930s. This vantage point faces southwest from the intersection of 13th Street and Wyandotte Street. The building was constructed at a cost of $6,500,000.